Over the past few months I have developed the terrible habit of wanting some chocolate before bed. While chocolate in moderation is not bad, the way I was consuming it was going to end up with me busting out of my jeans in a months time. 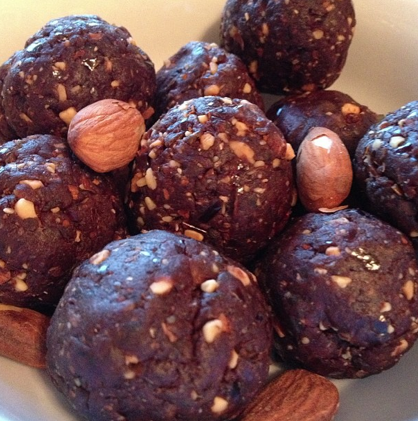 Since I had some free over the holiday break I started testing some great grain free deserts and last night I hit the mothership. I got the idea for these Chocolate Peanut Butter Fudge Bites from Lexi’s Clean Kitchen Blog but didn’t have some of the key ingredients. I decided to get a little creative and what ensued was a powerhouse of deliciousness that my diabetic Fiance was thrilled he could eat without a major spike in his sugar. This image is from Lexi’s blog, but this is exactly what my end result looked like.

Put all the below ingredients in a food processor.

We don’t have a food processor, and that definitely would have been the right call but instead, I put all the ingredients into my Vitamix and blended it for about 1 minute (well really, until my Vitamix overheated due to the thick mixture).

I then rolled the fudge into little balls and put in the fridge for later enjoyment. But first we both taste tested and were blown away how good these Chocolate Peanut Butter Fudge Bites were even before they were cold!