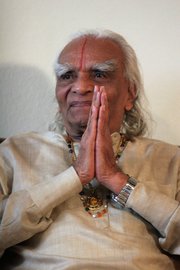 “Yoga does not just change the way we see things, it transforms the person who sees.”

We at YogaWorks would like to express our deepest sympathies to the students, family and friends of B.K.S. Iyengar, who passed away this week in Pune, India at the age of 95. He leaves behind a legacy of spreading the benefits of yoga in the West, and making yoga more accessible for everyone.

As a child, B.K.S. Iyengar survived tuberculosis, typhoid and malaria, which left him extremely weak. However, his life was changed at the age of 16 when he was introduced to yoga by Sri T. Krishnamacharya. Shortly thereafter, he began teaching in Pune at age 18.

In his 2005 book Light on Life, Mr. Iyengar wrote, “I set off in yoga 70 years ago when ridicule, rejection and outright condemnation were the lot of a seeker through yoga even in its native land of India.” But a shift in his teaching path came in 1952 when he taught renowned violinist Yehudi Menuhin, who then introduced him to other notable Westerners. Today Iyengar yoga is taught in 70 countries, and his books have been translated in 18 languages.

Mr Iyengar’s signature style of yoga, which is characterized by long holds, breathing techniques and prop use, is a primary influence on the YogaWorks method. His book Light on Yoga is an integral part of the YogaWorks teacher training. Yoga teacher and former YogaWorks Teacher Training Manager, Julie Kleinman says, “I always thought of Mr Iyengar and the yoga teachers he trained as providing a wellspring of knowledge that I, and all the teachers I know, drank from regularly. The teaching that came down from Mr. Iyengar was the source I would seek answers from when faced with my own yoga questions, those that came from my students, or any yoga problems that were beyond my ken.” We are forever grateful for his teachings, gifts and the vast impact he’s had here at YogaWorks, and on yoga everywhere.

His daughter, Geetaji Iyengar says, “Only his body has ended. One person’s efforts from inside out, changed the acceptance of yoga throughout the world. Nothing was hidden, from the time he began to practice, to his illness and death. Even last night he was telling [his granddaughter] Abhijata, ‘I have shown you all these things, now realize them for yourself.’ What he has given cannot be encompassed by words. If a disciple is more developed, then that person will understand. What can be said in words, is that he was precious to us.”

It’s been written that he hoped his practice and art would remain with the thousands he taught and mentored for health, equilibrium and inner peace. In that spirit, a few of the Iyengar teachers in the YogaWorks community shared the following words to honor their teacher, B.K.S. Iyengar:

“Guruji, thank you for teaching me to listen to my most quiet moments and movements, to see the vibrancy in all that is around me, to love a smile, to reflect deeply, to expect excellence in all ways, and to never, ever give up, Pranams.” – Lisa Walford, Senior Iyengar Teacher and Co-Creator of YogaWorks Teacher Training

“B.K.S. Iyengar’s remarkable presence, curiosity, and capacity to fully penetrate his subject matter was utterly brilliant. He stayed engaged in his practice, teaching and writing right up until his final days. Always interested and involved, he was a true pioneer of modern yoga. We honor his legacy by staying open, curious, joyful, and awake. But most of all we honor his legacy by practicing, and teaching, with love.” – Carri Owerko, Senior Iyengar Teacher

“B.K.S. Iyengar considered all yoga students his ‘children of yoga.’  He was compassion personified. His profound yoga practice allowed him to help millions of people around the globe.  A true humanitarian. I had the honor to cook for him for many years when he was in the United States, He ate simply, lived simply and by his example showed us how to live a yogic life. The way he lived his life was truly art.  Thank you Sri B.K.S. Iyengar, our dear Guruji.  You are with us forever. You have been a foundation for our beautiful yoga community. All Glories to you!” – Chris Stein, Certified Iyengar Teacher

“Many students do not know how much Guruji touched everyones life, if you use a yoga mat, belt, blanket, bolster, or any such prop, all these things came from Guruji, to help us practice Yoga with better understandings. He has gone but will never be foregotton, his teachings will carry on . I feel so blessed that I did get to spend so much time with him and his family. I will dearly miss him” – Denise Thibault, Certified Iyengar Teacher

“I am sad about his death, but very grateful about all the years that I spent in Pune learning from him. I am especially thankful that I was able to be there for his 95th birthday and have the memory of how great he was a few months ago (December 2013). What an extraordinary and generous  human being he was. Thank you Guruji for giving us so much.” – Jacqueline Gerson, Certified Iyengar Teacher

“Sri BKS Iyengar changed the course of my life.  Through him, I found a force, a directive, a commitment to teaching for over thirty years. I feel a great sense of loss with his passing, yet he has left such an imprint on my soul that I know that he will always be with me. Thank you Guruji, I will always cherish my moments with you.” – Scott Hobbs, Certified Iyengar Teacher