It’s not easy getting a guy into a yoga studio for the first time. The images associated with yoga can be intimidating – a lean man twisted with a shirtless six-pack, staring intensely into the distance and holding himself up by a single pinky finger. I remember being nervous and more than a bit apprehensive setting foot into my first YogaWorks class. To me, yoga was a new land, its words and customs unfamiliar, its movements and gestures strange and sometimes daunting. Especially daunting when I kept thinking about the intense guy holding himself up by his pinky finger.

But here’s what that image doesn’t show you: the teacher standing off to the side, out-of-frame. The welcoming guide, supportive and kind, leading you into this foreign land. A guide you can trust, who makes you feel comfortable. I tell everyone that it might take a few teachers to really get into yoga. Not that your first teacher is bad, it’s just she or he might not be the right fit for you. Yoga is as much about finding the right guide as it is about the journey itself.

Sometimes people see yoga teachers as some strange species, focused solely on the next challenging pose or the next step towards “enlightenment.” That their life is yoga and they think and speak of nothing else. So there’s something comforting when a teacher jokingly grouses about how his daughters rule his life or another tells the class how excited she is for the Dodgers-Giants game later that day; when a teacher tells tales of his life as a businessman before he threw it all away to “become happy” or another plays that new Arcade Fire song during class right after you were playing that same song in you car; when a teacher makes a passing reference to Daenerys Targaryen, the Mother of Dragons, as we go into a challenging pose, because the Mother of Dragons could surely hold that side plank a few seconds longer. Wait, did my yoga teacher just reference Game of Thrones?

The best teachers I’ve had have been relatable. They’ve earned my trust and made me laugh along the way, reminding me that the twisty pose is hard and that it takes time to get there. That it’s the journey as much as the destination.

Yoga is about creating your own space, being emboldened by the best guides who are the best because, as they teach, they joke and play and share a little about themselves. They make the trip enjoyable and make you feel safe along the way.

That image of the twisting, intense guy doesn’t show you the down-to-earth, supportive people right there by your side. Since day one it’s always been about those people.

And yoga people are people too. 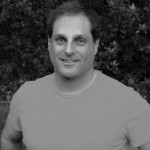 Matt Liberman works in the YogaWorks Retail Distribution Center. When he’s not in class trying to maintain a handstand, he can be found playing with his dog Pete or finishing up his first novel.