Running late to yoga? It happens. You get stuck in traffic, you can’t find a parking spot, or you just plain lost track of time. This doesn’t make you a bad person, or a bad yogi. Just because you’re running a few minutes late doesn’t mean that you should ditch the idea of practicing. We as teachers want to encourage you to practice as much as is possible – it’s meant to help you, not stress you out. However, arriving late to class can be disruptive, which is why some teachers can be put off. Here are a couple of ideas that can help ease your transition into class when you’re late, and maximize the time you have while you’re there.

If the class has already started when you arrive, first ascertain if they’re in a beginning meditation or peaceful silence in some way. If this is the case, please wait until the asana portion of the class begins before you enter. No matter how quiet you think you may be, everyone can hear you and they won’t be able to focus until you’re settled.

If you accidentally enter right in the middle of meditation, please do not wander around looking for a spot and then unroll your mat, put your bag down, etc. Instead, sit right at the door and get as still and quiet as quickly as possible. Once the asana portion of the class has begun, you can get up, put your things away, quickly find a spot and join the class wherever they are in the sequence.

Try not to make a drama of being late. You don’t have to apologize, we know you’re sorry and the act of apologizing just brings more attention to yourself.  Instead,  just find a spot quickly and efficiently. If you need to ask someone to move, a brief “May I squeeze in here please?” and a “Thank you” once they’ve moved will do.For the rest of us, we all hate it when we’ve found our perfect spot and someone comes in late. We spend those moments secretly hoping they won’t come near us, so we don’t have to move. However, usually the person who’s late didn’t do it on purpose to be disrespectful and mean, they were just doing life the best they could and something happened. This is when they need a yoga class the most! Moving over for a late person is good karma (I believe the Yoga Gods calculate that one “Gracious Move” to be equal to five “Chaturangas!”). Though you may feel cramped, there may come a day when life doesn’t work out so well for you but you still really need to practice. You’ll scramble into the yoga room, and someone will move for you.

Agree with Sara? Got something to add? Let us know in the comments below! 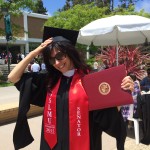 Sara Elizabeth Ivanhoe, M.A. is celebrating her 20- year teaching anniversary this year. To mark the occasion, she completed Graduate School with Loyola Marymount University’s Inaugural Class in Yoga Philosophy. She is the Yoga Spokesperson for “Weight Watchers,” “Yoga for Dummies,” “Crunch Yoga,” and has appeared as a series regular on “Dr. Drew’s Celebrity Rehab,” as the therapeutic instructor. Her mentor for Jnana Yoga is Dr. Christopher Key Chapple, for Bhakti Yoga, Mata Amritanandamayi (Amma), and for Hatha Yoga, Erich Schiffmann. For most of that 20 years, she can call YogaWorks her home.